Historians searching for the wreckage of a World War II German aircraft have discovered the remains of two World War I 15-pounder field guns.

The guns were probably used as targets during World War II training exercises.

The Daily Mail quotes Mark Khan, one of the military historians leading the project, who said: ‘We were hoping to do a crashed aircraft recovery and found out about a possible Ju-188 German plane shot down by a night fighter group in the Second World War. 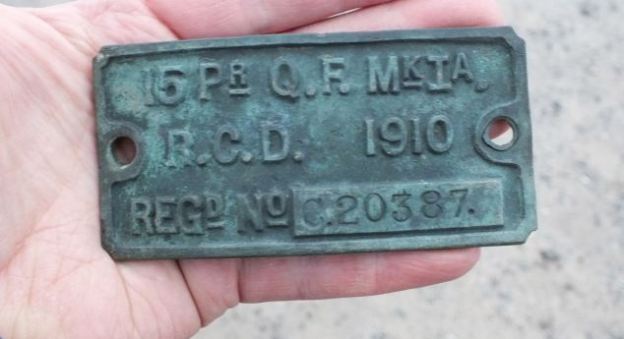 Maker’s plate from one of the field guns, showing a date of 1910

‘We got a grid reference for the plane on Salisbury Plain but could only find what we think was the impact crater. We were heading back to our vehicles when we spotted one of the two guns. The second gun was located about 30 feet away, also partially buried.

The 15-pounder guns were originally issued to Territorial Army and New Army units in lieu of the more modern 18-pounders. They were generally phased out in 1916.

The guns may go on show at Firepower, the artillery museum in Woolwich, London, or at the Honourable Artillery Company (HAC), also in the UK capital.