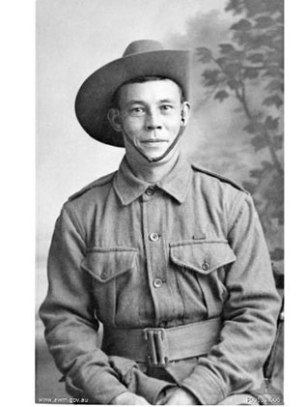 Billy Sing was known as ‘The Gallipoli Sniper’ and is said to have killed 300 men during World War I, reports Adelaide Now.

The newspaper suggests Sing claimed he never lost sleep over the men he shot, but died in obscurity, traumatised by the war, and lay in an unmarked grave for more than 50 years prior to being recognised and gaining an official headstone.

Sing’s mother was English and his father a Chinese farmer from Shanghai. He was born at Clermont, north-west of Rockhampton, Australia, in 1886 and became a marksman as a boy, shooting the curly tails off pigs.

He worked as a stockman, cane-cutter and kangaroo shooter. He enlisted in October 1914.

Ray Poon, of the Chinese-Australian Historical Association, told the newspaper: ‘Recruiting officers had the right to knock back volunteers if they didn’t look European enough, but Billy was taken because of the reputation he had as a crack shot.

‘Even though the Chinese Australians encountered prejudice they still wanted to fight for their country.’

Sing was awarded the Distinguished Conduct Medal for gallantry at Gallipoli and the Belgian Croix de Guerre for his bravery on the Western Front.

He survived being shot on three separate occasions but after he was gassed in Belgium he suffered lung problems for the rest of his life.

While recuperating from his wounds he married a Scottish waitress in Edinburgh in 1917 and brought her home to Clermont after the Armistice. The marriage did not survive and Sing drifted from one failed endeavour to another prior to his death in 1943.