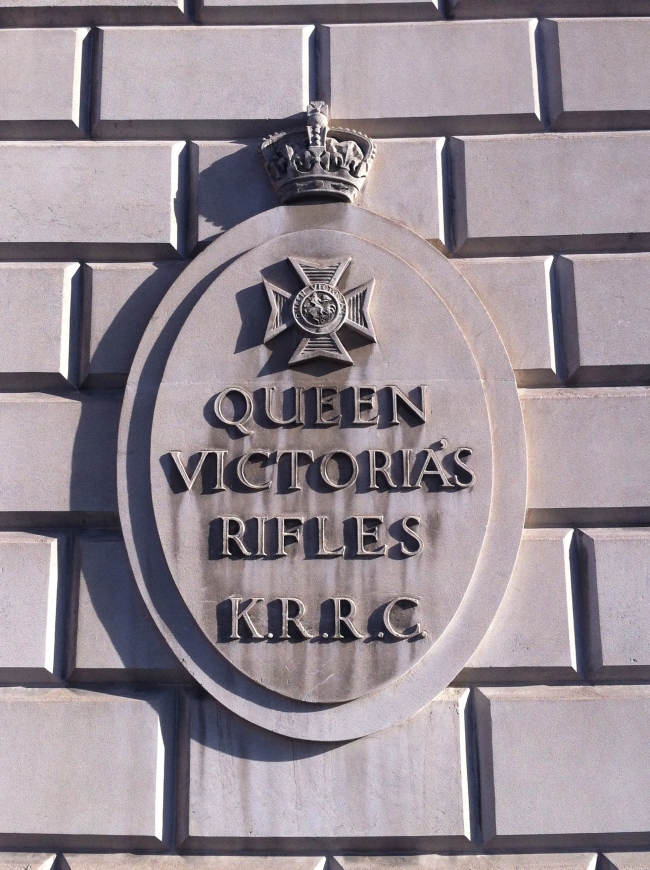 The badge of the Queen Victoria’s Rifles provides a reminder of World War I in one of London’s most well-heeled districts.

It adorns the wall of 56 Davies Street, where the unit (officially the 9th County of London Battalion) was based at the outbreak of war in 1914 and where it acontinued to have a presence throughout World War I and beyond.

The battalion landed at Le Havre on 5 November 1914 and was heavily engaged at Hill 60, Ypres, on 17 April 1915. Despite numerous casualties the unit repulsed a German counter attack and one of its officers, lieutenant Geoffrey Wooley, was awarded the Victoria Cross.

Wooley was the son of the Reverend George Wooley, the curate of St Matthew’s Church, Upper Clapton, Hackney. He had studied at Queen’s College, Oxford, and looked set for an ecclesiastical career before the war broke out.

His VC citation read: ‘For most conspicuous bravery on “Hill 60” during the night of 20th–21st April, 1915. Although the only officer on the hill at the time, and with very few men, he successfully resisted all attacks on his trench, and continued throwing bombs and encouraging his men until relieved. His trench during all this time was being heavily shelled and bombed and was subjected to heavy machine gun fire by the enemy.’

After the war Wooley resumed his theology studies at Oxford and later worked as a parish priest and as the chaplain of Harrow School. He rejoined the army in World War II and served as a major in the Royal Army Chaplains’ Department.

For film footage showing men of the Queen Victoria’s Rifles in 1914, click here.