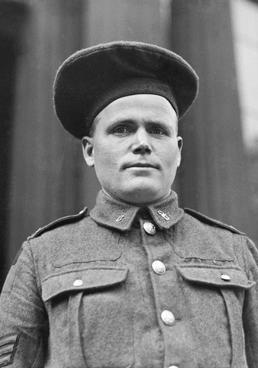 He was one of four Canadian soldiers to be awarded the VC on the first day of the Amiens Offensive, a pivotal assault that ultimately led to the end of the First World War.

Sergeant Good survived the war and returned to his native New Brunswick, where he died in 1969 at the age of 80.

The Canadian War Museum now holds 34 of the 96 Victoria Crosses awarded to Canadians.

‘Medals such as sergeant Good’s VC help us tell the story of Canada’s role in the First World War,’ said James Whitham, director general of the Canadian War Museum.

‘As we approach the Centenary, it is more important than ever to continue telling their stories.’

On 8 August 1918, Sergeant Good, then a corporal, was part of the 13th Infantry Battalion, Canadian Expeditionary Force. His company pinned down by heavy fire and Good single-handedly attacked a German machine-gun nest, overwhelming the occupants and their three machine-guns. Later the same day, after encountering a German artillery battery, he led three men of his section successfully to capture the guns and their crews.

The Victoria Cross medal is part of a collection of items belonging to Sergeant Good, including his khaki field jacket and regimental Balmoral cap, an inscribed gold watch awarded to him by the town of Bathurst, New Brunswick, and photographs of Herman Good and his brother, Ernest Robert Good, who was killed in action on the Somme in 1916 and is commemorated on the Vimy Memorial to the Missing.

The medal was purchased with the assistance of the Museum’s National Collection Fund.

The Fund is supported by donors who help the Canadian Museum of Civilization and the Canadian War Museum acquire important artifacts of Canada’s cultural and military history that might otherwise be purchased by private collectors or museums outside Canada.

The Good VC will remain on display at the Museum until 5 January 2014.