The Briton killed within hours of outbreak of WW1 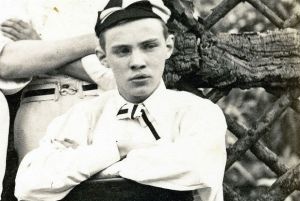 Henry Hadley at Cheltenham College around 1880

Historian Richard van Emden suggests Henry Hadley should be recognized as the first British casualty of the First World War.

Hadley, a former army officer with the West India Regiment who had been educated at Cheltenham College, was working as a teacher in Berlin, was probably driven to leave the city by the German declaration of war on Russia on 1 August.

Argument on a train

He was travelling by rail from Berlin to Paris with his housekeeper when he was shot on 3 August at Gelsenkirchen. There was an argument on the train and Hadley’s housekeeper, Elizabeth Pratley found him lying on the floor in the train corridor.

A German officer, later identified as lieutenant Nicolay, had fired at Hadley from close range, supposedly after the latter had been acting suspiciously.

Hadley died at the Evangelical Hospital in Gelsenkirchen at 3.15am local time on 5 August 1914, just three hours after the UK declared war on Germany.

The CWGC database records four men who died on 4 August. As the war started at 11pm (UK time-midnight in Berlin), it is likely that these deaths took place during the course of the 4th rather than in the one hour between war being declared and midnight.

The four are private G Davies of the Royal Marines, boy servant Ernest Brackley (aged 16) of the Royal Navy, private Joseph Viles of the Somerset Light Infantry, and, in India, staff serjeant SE West of the Dragoon Guards.