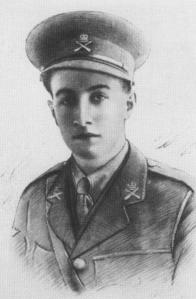 In 1914 20-year-old Cecil Sewell was an articled clerk at his father’s law firm in Greenwich, London.

At the outbreak of war he joined the Royal West Kent Regiment. In 1916 he signed up with the newly established Tank Corps, where he became a commander of a troop of Whippet light tanks.

The Whippet was a comparatively agile machine. It had a crew of three: gunner, driver – and commander – whose duties included directing the tank and helping the gunner fire a total of four machine guns mounted in the turret.

On 29 August 1918 Sewell was in charge of a section of tanks advancing towards German positions near Fremicourt. One of his machines steered into a shell hole, turned over and caught fire. Realising the crew was trapped, Sewell dismounted from his tank, sprinted across open ground under machine gun fire and proceeded to dig through the mud that was blocking the escape hatch and to free his soldiers.

The London Gazette takes up the story: ‘Having done this he saw one of his own crew lying wounded behind his own tank. He crossed the open ground to his assistance. Although hit while doing so he reached the tank. Only a few minutes later he was hit, fatally this time, while dressing his wounded driver.’

The full citation is quote on the CWGC website, here.

Lieutenant Sewell was 23 and is buried at Vaulx Hill Cemetery. His brothers Harry and Herbert also died during the First World War.

Sewell’s tank is now in the Tank Museum, Dorset, UK.