Surviving Gallipoli ship to be restored and put on display 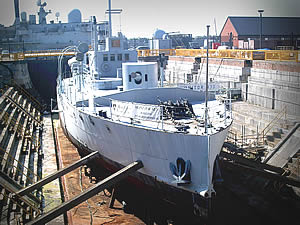 The last surviving ship that took part in the Gallipoli campaign of 1915 is to be restored and opened to the public with the help of a £1.75m grant from the Heritage Lottery Fund (HLF).

HMS M33 was a monitor – essentially a 53m-long, floating gun platform – that bombarded the Turkish positions while British and Commonwealth troops attempted to break through.

Project director Matthew Sheldon said: ‘HMS M33 is a small ship, but has a big history. Finally, we’ll be able to share the story of her part in the Gallipoli Campaign, and reveal what it was like for the 72 crew who were crammed on board.’

The ship was able to come closer to shore than most of its counterparts because of its shallow hull. It was then able to bombard targets on land.

Following the Gallipoli campaign, M33 took part in the Russian Civil War, where it was involved in the withdrawal of troops during the North Russia Intervention, which took place between 1918 and 1919.

It spent the remainder of its active service in Portsmouth, where it remains to this day.

Museum director Professor Dominic Tweddle said: ‘We are delighted that the Heritage Lottery Fund has made this grant to the National Museum of the Royal Navy to conserve and restore the ship – she will be a permanent commemoration and a reminder that the First World War took place at sea just as much as on land.’