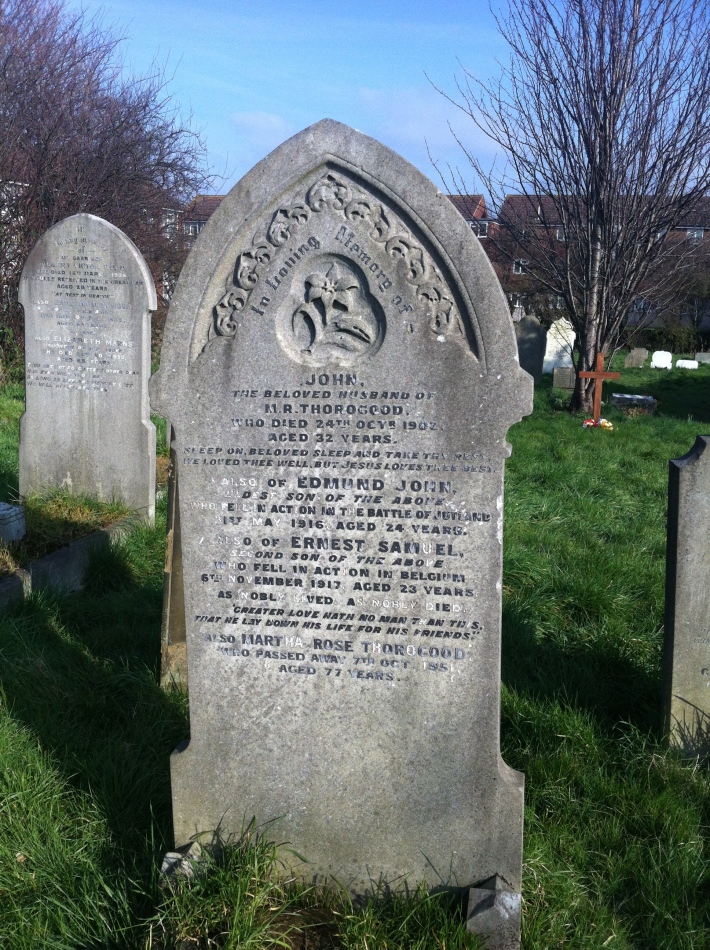 Tucked away at the back of churchyard in east London is this gravestone that tells the sad story of how a widowed mother lost two of her sons in World War I.

Edmund John Thorogood was a gunner in the Royal Marine Artillery aboard HMS Queen Mary and was killed at the Battle of Jutland on 31 May 1916.

HMS Queen Mary was a 27,000 ton battlecruiser that exploded and sunk after being hit by several shells. Of her 1266 crew, only 18 survived. There is a YouTube video of the wreck here.

In the 1911 census Edmund’s job is listed as telephone assembler, probably for the Sterling Telephone and Electric Company. He was living at 69 Victoria Road, Barking.

Ernest Samuel Thorogood was an acting bombardier in C Battery, 108th Brigade, Royal Field Artillery. He died on 6 November 1917 and is buried at Ruisseau Farm Cemetery near Langemark, Ypres. In the 1911 census his job is reported as armature winder.

CWGC lists their parents’ address as 95, Faircross Avenue, Barking, Essex – although their father died in 1902.

Very sad to think of their mother, Martha Rose, bringing up these two boys, perhaps on her own, only to lose them both aged 24 and 23 within just over a year of each other.

According to the 1911 census Martha also had three younger children. Alfred James (14), who was working as a junior clerk at the time, John Hector (10) and Elsie Grace (8).

The Thorogood gravestone is in the graveyard at the parish church in Dagenham.