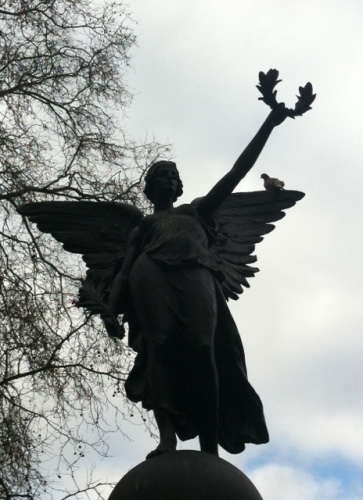 Just south of Angel Underground station in Islington is the Finsbury war memorial.

Depicting a winged victory, who looks somehow 1920s in dress and shape, holding a laurel wreath, it has four panels at its base.

One of these depicts the 11th Battalion London Regiment’s (Finsbury Rifles) assault on Gaza in April 1917. There used to be two more – one depicting the attack on Zeebrugge, the other the battle at Piave (in 1918 in Italy) – perhaps because so many Italians and people of Italian extraction lived in this area. Appallingly, he latter two were both stolen some years ago.

The Gaza plaque perhaps survived because it faces the road and so could not be removed without the culprits being spotted.

The Finsbury Rifles took part in the Gallipoli campaign before being sent to Egypt. After two failed assaults on Gaza, the third offensive took place in November 1917 with air cover from Bristol Fighters (an aircraft is depicted on the plaque though it depicts an earlier engagement).

Lance corporal John Christie of the Finsbury Rifles was awarded the VC the following month, on 21-22 December 1917 at Fejja, Palestine. His citation reads that he fought off a Turkish counter-attack using bombs in spite of being heavily outnumbered and exposed to enemy fire.

Christie was a parcels clerk at Euston Station who joined the regiment in September 1914. Wounded in the head at Gallipoli, he rejoined his battalion in November 1915 and then took part in its engagements in Palestine.

There is more about L/Cpl Christie on the Kings Royal Rifle Corps site here.