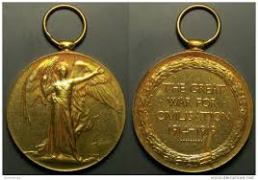 A man has discovered a missing World War I Victory medal on auction site Ebay 40 years after it disappeared.

Terry Snow, from Devon, accidentally lost track of the medal during a house move and has since searched for it in antique shops and online in the hope that it might one day surface.

On his birthday, Saturday, January 4, he finally spotted the missing medal online where it was being sold by a collector from Lincoln.

Terry’s father, Gilbert Snow, served as a Lewis gunner in the Middlesex Regiment. Like many veterans of World War I he did not often mention his experiences, but his son does at least recall one episode.

‘On one occasion being at the end of the line, he turned around to notice all of his mates had gone. He then ran down a road and the Germans got behind him and as he was running with the Lewis Gun on his back, he had bullets spraying all around him, but he chucked it on the floor so he could run faster.

‘But one of the bullets actually shattered the gun across his shoulder and another went straight through his trousers.

‘I have actually been to take photographs of one of these roads he went down – there are still live shells there to this day from 100 years ago.’