Album of flowers collected on Western Front to be auctioned 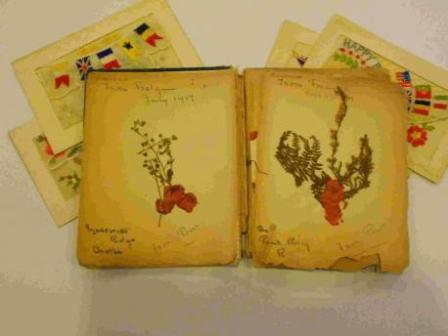 A soldier’s album, filled with pressed flowers collected by during his time at the Front during the First World War, is to be auctioned in Dorchester, Dorset.

The unique record was almost lost forever when it was thrown into a skip during a house clearance. Thankfully it was retrieved before it could come to any harm.

Amy Brenan, of Duke’s Auctioneers in Dorchester, said: ‘The album is a marvellous record of one soldier’s travels in Europe during the First World War.

‘Each flower has been pressed between the pages of his autograph book and annotated with the place and date where it was picked.’

‘What is particularly nice is that the album of pressed plants and flowers was clearly put together as a gift.

‘Most of the pages are labelled as “From Bert” so perhaps he was compiling the album for his sweetheart back home. ‘Despite the distance, he was clearly relying on thoughts of his loved ones to keep him going.

In 2013, Duke’s Auctioneers sold the Roughton Poppy, the world’s oldest poppy, picked in a frontline trench in Arras, northern France in 1916 by Private Cecil Roughton.