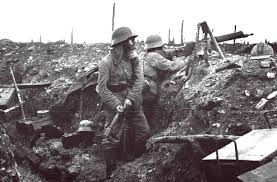 The Volksbund Deutsche Kriegsgräberfürsorge (VDK) – the German War Graves Commission – has launched a Centenary website. It features information and projects relating to the Centenary of the First World War. The site also enables visitors to search for the names of the German war dead.

As the site points out: ‘2014 is the 100th anniversary of the start of the First World War. In this “great seminal catastrophe” of the 20th century with its murderous, costly battles, almost 10 million soldiers died a gruesome death; a further 20 million were wounded and were physically or mentally scarred for life.

‘Entire regions were devastated – broken up by shells, contaminated by poison gas. Names like Verdun, Ypres, Tannenberg or the Somme stand for a hitherto unprecedented level of mass slaughter, which makes a mockery of the propaganda of the time that told of a “hero’s death”.’