An Army Service Corps driver and his truck, 1916 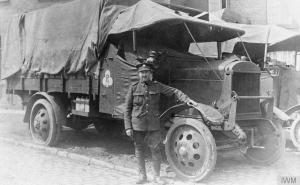 A soldier of the 34 Auxiliary Patrol Company, 960 Motor Transport Company, Army Service Corps (ASC) stands by his truck in a photograph probably taken in 1916.

Although it is an organisation that is often forgotten in the context of the First World War, it performed a crucial function for the British Army.

At its peak, the ASC numbered 10,547 officers and 315,334 men. There were also thousands of Indian, Egyptian and Chinese under ASC command.

Nicknamed Ally Sloper’s Cavalry, after a cartoon character of the time, the moniker may have had unkind overtones of ‘sloping off’ somewhere relatively safe when the heat was on.

Soldiers of the ASC were often exposed to danger, however, either taking ammunition and supplies to the front line or having to act as emergency infantry when the need arose.

The ASC was granted the title ‘Royal’ following the First World War.